Some frequent questions about The Culture of Design and design culture, answered by Guy Julier.

What is Design Culture?

Design culture is both a state of affairs and a mode of study. We increasingly hear of a place, a design studio or even someone’s home being described as a ‘design culture’. By this I think they mean the way that design is used and practised. They can mean it professionally or just as a ‘way of life’ — how individuals or groups configure their lives with and through material, spatial and visual things. I tend to use lower-case ‘d’ and ‘c’ here to distinguish it from Design Culture, which I see as a field of academic study.

Design Culture, then, studies the configurations of and interactions between the economic work of designers, the systems of production and the everyday worlds of consumption. So it’s a way of delving deeper into ‘design culture’ (lower case) in all its different contexts and looking at specific ways by which these fit, or not, together.

You can read in much more depth about this in chapters 1 and 12 of the third edition of The Culture of Design.

What made you want to write The Culture of Design originally? 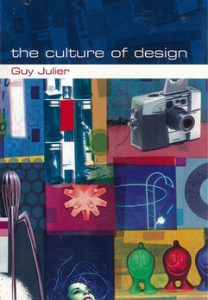 In the 1990s I was teaching undergraduate graphic design and industrial design students. My job was to help students make connections between their practical design work and its wider social and historical contexts. I just felt that there very few texts out there which were useful to them in terms of giving them theoretical tools to analyse different forms of design.

There were lots of changes going on at the time. One was that academics in the social sciences (sociology, human geography, anthropology) were beginning to write about creative  industries. They were producing some useful material, but they didn’t pay as much attention to the actual form of things or the detail of how they were produced and distributed.

Another was that design was becoming much more interdisciplinary and some were placing increasing emphasis on their role as strategists. I began to think that a way to deal with this was not to think in terms of traditional design disciplines such as graphic design or product design, but look at the different fields where design is applied and used. When thinking about consumer products, for example, this isn’t just about industrial design, though that’s important. It also embraces communications, branding, interaction design, the configuration of retail and post-purchase back-up services.

Finally, there had been some good advances in material culture studies which looks primarily at the way things are consumed or experienced. I was concerned that there was a kind of gap between this and those who were interested in the work of designers. So I thought that we should start to think about how these two interacted more.

Are you critical of design or do you celebrate it?

I think it’s really important that we understand better how designers work, how their everyday activities are configured, their ambitions, the way they talk about their work and how it relates to economic structures and governmental policies, for example. (Liz Moor and I moved this on a bit in the book we edited, Design and Creativity:  Policy, Management and Practice (2009).) It is only by really understanding something, how a situation has come about and how it’s functioning can we begin to improve things.

My father was an art teacher, my sister is a craftperson, my brother is a graphic designer, my son works in service design. So I have a strong affinity with creative people! But I passionately believe in the need to develop design literacy, not just in what things look like, but in the many ways by which design functions. I think a lot of so-called ‘design criticism’ still just talks about form, and we need to step things up.

I hope that through researching, thinking and communicating things about design culture we can also find our way to new ways of practising design, particulary ones that attend to climate change, social injustice and many other challenges that we have to confront.

So, could the study of design culture lead to a kind of design practice?

Absolutely! The design industries are in constant change. New sectors and ways of doing design are always being invented. So why shouldn’t a deep understanding of the ways by which design functions in society lead us to finding fresh ways of doing it?

I write books and articles and I give lectures. But whenever the opportunity arises I like to collaborate with institutions, groups or communities in more direct ways. I hope that I can bring what I’ve learnt about other examples or knowledge of systems to the table.

How does the The Culture of Design relate to Actor-Network Theory (ANT) or Science and Technology Studies (STS)?

These areas of study have become extremly influential since I wrote the first edition of the book in the late 1990s. I have gradually come to see how useful they are in studying Design Culture. I wrote about ‘practice theory’ in the second edition which came out in 2008. By the time I got to write the third edition through 2012-13, I really thought that I should make fuller reference to these. They’d been in the background for me for a long time. This is why I discussed ANT in chapter 11 of the third edition.

Actor-Network Theory is quite tricky to understand. This is why I tried to reverse into it, talking about objects and their networks first and then discussing the theories. That said, I think that there are three areas of ANT that need more work on. The first is in terms of the role of aesthetics. There is a tendency sometimes, I think, in ANT to think about objects merely as things that are used rather than experienced. Second, I think that dynamics and change could do with more attention. How do complex networks change? Third, we might think more about scale in networks. Do they go on for ever or might they have boundaries? How are these determined?

How does Design Culture differ from Design Studies?

I tend to see Design Studies predominantly as attending much more to design process — understanding how design is undertaken and how meanings are produced through design. This needn’t be just in terms of its management. Issues of semantics, psychology, philosophy all come in here. But Design Culture takes a broader view on design in society. It therefore opens more on to questions such as urban experience, mobilities, social practice and politics among many others.

Where can you study Design Culture?

I supervise several PhDs in Design Culture studies. See the ***  to find out what some of these are. If you want to undertake a PhD in this field, get in contact with me directly and we can have a chat to see if this is feasible.